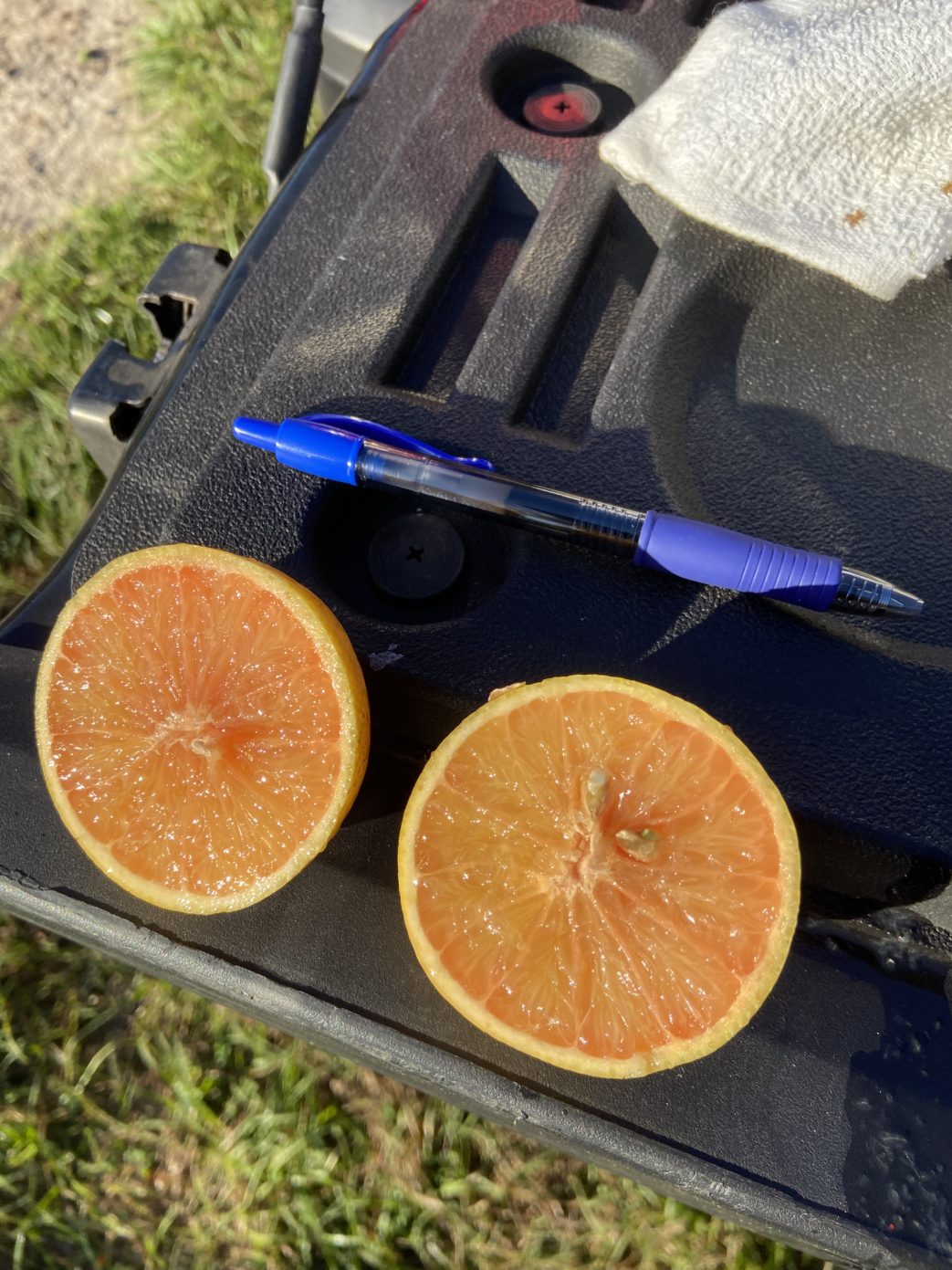 My maternal grandmother used to say, “Getting old ain’t for sissies.” There is some universally applicable wisdom in that short saying. Sometimes the mere act of survival is an accomplishment.

Consider the challenges that a 50- to 75-year-old citrus tree has faced during its life in Florida. I’ll spare you the nausea of a comprehensive list, but suffice it to say, such trees have endured their share of severe weather, invasive pests and diseases — all while facing the common day-to-day subtropical horticultural challenges. It is to this group of trees that I would like to draw your attention.

Recently, while collecting sweet orange fruit samples at the Whitmore Foundation Farm, I noticed an interesting fruit lying in the grassy middle. I had run over it with my truck, and the pink flesh was exposed. Had I not run over it, it was not a fruit that would likely have commanded my attention. The fruit was the size of a small mandarin (a small 210), round and offered a light but appealing grapefruit aroma.

I soon identified the source tree. The mid-sized tree was on Swingle rootstock, appeared to be quite old and may suffer from a range of maladies. However, it was holding a decent crop of fruit and very few had dropped.

The fruit was very firm. The flavor was reminiscent of a sweet and mild grapefruit. Brix on fruit tested ranged from 13.5 to the low 14s. Fruit is very low seeded; the first samples ranging from zero to two seeds. Though chippy, the fruit is peelable. However, like most grapefruit, the sections do not separate cleanly. The fruit seemed best suited to juicing or cutting. True HLB tolerance is impossible to gauge from one tree.

Having noted the position of the tree, I contacted Matthew Mattia, a horticulturalist with the U.S. Department of Agriculture (USDA). He identified the tree as a Wekiwa. I recall seeing that name in old literature but could not remember seeing one firsthand. This variety appears to be a cross made at the original USDA field station in Eustis. If it was crossed between 1892 and 1894, we are potentially looking at a 130-year-old variety. It is recorded as a cross between a Sampson tangelo and a grapefruit. This would make it 75% grapefruit (on paper). It was released as a tangelo, but its popularity at the time seemed to be constrained by its grapefruit-like qualities. Consumers favored a more mandarin/orange-flavored tangelo.

The Wekiwa is also planted in the Florida Department of Agriculture and Consumer Services arboretum in Winter Haven. The Winter Haven tree is on Kinkoji rootstock, is much smaller and produces slightly larger fruit, though not appreciably so. All other fruit qualities are identical to those of the Whitmore tree. The tree appears to be doing reasonably well with HLB.

Wekiwa is also in the University of California collection, but it apparently prefers the subtropics to more arid climates. In California, it has considerably more seeds, and the flesh is a white-golden color.

The usefulness of the Wekiwa remains to be seen. It may have use in niche markets or as a blending agent in processed grapefruit juice. The juice doesn’t likely have the balance or body to stand on its own. The size is a challenge for processors, but it could potentially run on a tangerine line. It is worth doing some work to enhance fruit size through rootstock choice and nutrition. The variety is in the public domain and can be obtained by anyone interested. Considering that the Wekiwa has no trouble building Brix while infected by HLB, it may have some significant value in breeding.

Wekiwa serves as a reminder of the value of keen observation of old-line varieties, unique limb sports and any other useful or interesting mutations. There just may be something out there that has value as a variety or some usefulness to the research community. It may be a tree sitting in the corner of a grove or a seedling that came up behind the barn.

Consider the industry’s current challenges with early-orange fruit drop and fruit quality. Consider all the discussion about declining Brix. Consider the many challenges facing grapefruit growers in an HLB-endemic environment. The research community does not possess the time and resources to chase down every interesting nuance found in a grove or dooryard tree, but trees or varieties that are outperforming the industry standards for fruit set, drop, quality, fruit size or Brix should be investigated. As an industry, we did not gain much from previous efforts to replicate apparent tolerance from “escape trees,” but a renewed focus on specific favorable traits and characteristics may provide a helpful piece of the puzzle. Sounds like a scavenger hunt, but it may be a scavenger hunt worth having.

Peter Chaires is executive director of the New Varieties Development and Management Corp.