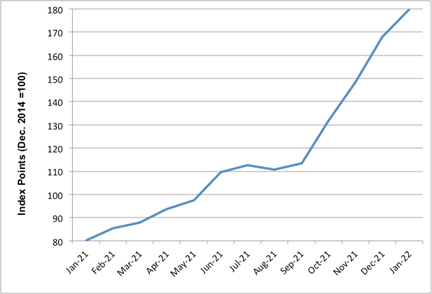 Just when the world took somewhat of a collective breath, hoping the COVID-19 pandemic might be easing, Russia invaded Ukraine. The conflict and the highest inflation rate in 40 years in the United States have focused attention on agriculture and food security.

For farmers in Florida and around the world, the confluence of events has presented challenges to production and profitability. The most apparent has been increasing input costs, especially for fertilizer.

Nathan Carson is in the fertilizer business. His grandfather, W.B. “Hap” Carson, founded Chemical Dynamics in Plant City, Florida in 1973. His father, David, now serves as company president. Nathan joined the family business in 2020 just as all these events began to unfold.

Beyond his day job, Carson is an observer of history and geopolitics. He says current events will impact fertilizer prices for a while. This began to come clear toward the end of 2020 as COVID-19 spread, and supply-chain disruptions were beginning to show up. Nitrogen prices rose 40% by the first quarter of 2021. Food prices soon began to follow upward trends.

“The thing to understand when you have increases for nitrogen (N), phosphorous (P) and potassium (K), there is a lag time before that price increase begins to be felt by consumers at the grocery store,” Carson says. “There is about a six-to-nine-month lag time, which is why in the third and fourth quarters of 2021 we began to see the rapid increases of food prices.”

Prices for both fertilizer and food continue to rise. In the past year, food prices in the United States are up by about 8%. By the end of 2021, prices for N, P and K had more than doubled. Carson notes those increases will be felt by consumers in the form of even higher food prices this summer.

The Russian invasion of Ukraine further complicated matters and will be driving up prices for fuel, fertilizer and food for the foreseeable future. Even before the invasion, China placed an export ban on fertilizers to preserve its own supplies.

According to The Fertilizer Institute (TFI), China accounted for 25% of global processed phosphate exports and 10% of urea exports in 2020. That is now gone from global trade. And there’s more disruptions to supply. According to TFI, Belarus has historically comprised approximately 21% of the potash global supply. In August of 2021, the U.S. and EU governments enacted sanctions against Belarus for election fraud and other human rights violations. This created a global supply shock in the potash market as financial institutions are reluctant to provide financing.

Russia set six-month quotas (not a full ban) on N and phosphate fertilizers in November 2021. Russia accounted for 10% of global processed phosphate exports and 23% and 14% of global exports for ammonia and urea, respectively, in 2020.

In response to the recent Russian invasion of Ukraine, the U.S. government enacted sanctions against Russia for its actions. Given Russia is a major global exporter of fertilizers, this will further add to the global supply shock.

The move was considered a powerful response to the Russian invasion but leaves Germany in a potential energy crunch. In response, the United States and European Union announced a task force to seek ways to lessen Europe’s dependence on Russia for natural gas. The action would supply the European Union with 15 billion cubic meters of liquified natural gas this year and 50 billion cubic meters by 2030.

“We’re announcing this effort to jump-start independent production of fertilizer and to aid sustainable agriculture practices,” Vilsack said. “We want to invest in fertilizer expansion in the United States that is independently produced, made in America, and hopefully embrace new innovation and support sustainable farming operations.”

While Florida growers have been hit by the steep increase in fertilizer prices, it could have been worse. Next year and beyond need to be considered.

“I think the best-case scenario for these things to begin to settle out won’t happen until 2024,” Carson says.  “Florida’s early growing season has helped us at least this year. We have been able to get what we needed in terms of fertilizer. There have been some localized shortages, but overall, we have been able to meet our needs.”

As the 2022 planting season gets underway in the Midwest, it is a different story for corn and soybean growers. According to TFI, growers have about 50% of their N, P and K needs in retail distribution warehouses. But because of the huge volume of fertilizer required and the concentrated growing season, the supply situation will be challenged.

“If I am a Florida grower, I would book now for my current and future needs to the extent I can, because the price situation is not going to get better anytime soon,” Carson says. “The closer we get to the Midwest planting season, the pressure on fertilizer pricing will go up.”

Farmers have always been at the mercy of markets. They must pay the prices dictated to them for the inputs they need to grow a crop but are price takers for the food they produce. In today’s world, this is an especially vulnerable space.

“We need to be looking to precision agriculture technologies to get the most out of our applications,” he says. “We need to consider working micronutrient and biostimulant applications into our production programs.

Micronutrients have not faced as much price pressure as N, P and K, and biostimulants will help make nutrients in the soil more available to plants. Growers need to be following the 4R approach (right source, time, rate and place). Agronomy is going to be key in weathering this storm.”

PRICES UP ON FLORIDA FARM

Matt Parke, farm manager of Parkesdale Farms in Plant City, says his fertilizer expenses are up among a lot of other things. He says expenses rose 20% this year for supplies like diesel, paper products, plastic, fertilizer and chemicals. Those costs could rise another 30% to 40% next year, though dealers are hesitant to quote specific prices given the volatile nature of the current supply chain.

“We’re looking at a 30% increase for fertilizer before we start next year,” Parke says. “Dealers haven’t set it in stone yet, but they said look for a 30% increase. They do not want to tell us about any prices on any material until we get closer. It could be upwards of 40%.”