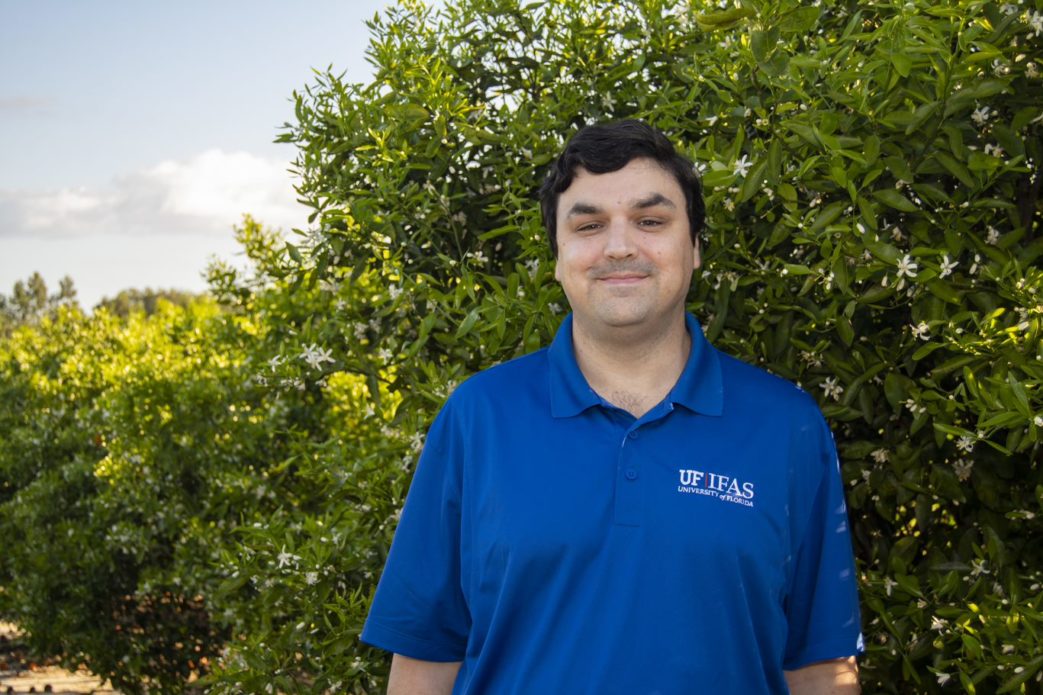 The University of Florida Institute of Food and Agricultural Sciences (UF/IFAS) is firmly engaged in the fight against HLB in a range of scientific disciplines. These include entomology, plant improvement (scion and rootstock), gene editing, microbiology and cell science, soil and water research, pathology, root health, irrigation, nutrition and others.

The recent hire of John Chater further strengthens the UF/IFAS citrus research team. The position provides much needed horticultural support for the plant improvement team and the state’s overarching challenge of producing and delivering a quality marketable citrus crop in an HLB-endemic environment. Some of you may have had a chance to meet Chater already as he journeys around the industry visiting field trial sites and growers. For those who have not had the pleasure of making his acquaintance in person, this is a good opportunity to make a formal introduction.

Chater is an assistant professor and citrus genetic improvement horticulturist at the UF/IFAS Citrus Research and Education Center (CREC) in Lake Alfred. He works with Fred Gmitter and Jude Grosser of the CREC Plant Improvement Team to identify and select scions and rootstocks for growers using field trials as a guide. He also is tasked with developing production strategies for newly released plant material.

Chater was born in Southern California and grew up in Ventura County, historically a major lemon-producing region of the United States. He attended University of California, Santa Barbara for his undergraduate work and subsequently worked for Suntory and for Jackson and Perkins at a rose-breeding facility in Somis, California. After that, he worked for a soils engineering firm before going back to graduate school.

He has a master’s degree in agriculture with an emphasis in crop science from the Department of Horticulture & Crop Science at California Polytechnic State University, San Luis Obispo. At Cal Poly, he was a part-time lecturer and managed undergraduate students in the large citrus and avocado groves located there. He also did some consulting work for citrus and avocado growers.

Chater later earned his doctoral degree in 2017 from the Department of Botany and Plant Sciences at University of California, Riverside (UCR), working under Donald Merhaut, Mikeal Roose (the citrus breeder who selected the Tango mandarin), Peggy Mauk and Carol Lovatt. After completing his doctorate, he worked as a postdoctoral scholar for four years in Arthur Jia’s lab in the same department. He worked on citrus and pomegranate genomics and bioinformatics while attending the lab meetings of Roose.

Chater has taught several courses at UCR, Cal Poly and Chapman University and has almost a decade of Extension experience working with growers in California and Texas. While at UCR, he established multiple cultivar trials and acquired over $1 million in funding for his research program.

At UF/IFAS, Chater’s program emphases are focused on:

• Breeding and bioinformatics for citrus variety improvement, identification and evaluation of advanced selections in scion and rootstock field trials for the Florida citrus industry and other stakeholders

• Fruit and juice quality and sensory analysis to improve flavor

• Effects of rootstock-scion combinations on fruit and juice production

• Designing and planting citrus scion and rootstock field trials on University of Florida and grower-cooperator land.

Welcome aboard, John. We’re pleased to have you in the fight!