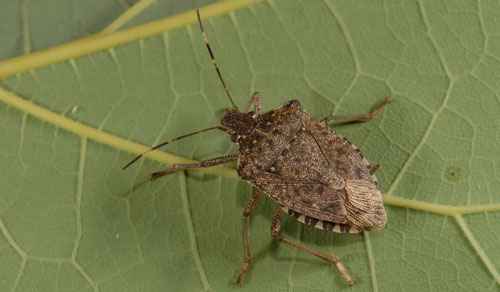 The stink bug has increasingly become problematic for Florida tomato growers. Not only must producers scout regularly to see if there are stink bugs in their fields, but they must also decipher what species is impacting their crops.

That’s what makes controlling stink bugs such a challenge, says Amanda Hodges, an Extension scientist at the University of Florida Institute of Food and Agricultural Sciences (UF/IFAS) entomology and nematology department.

“You need to know which species are causing problems because they’re coming into the field at different points in time, potentially. We’re also seeing some stink bug species that maybe damaging tomatoes that aren’t normally reported to damaged tomatoes in other parts of the country simply because the habitats around central and south Florida are a little bit different than what we see for tomato production in other parts of the country,” Hodges said.

“Stink bugs have piercing sucking mouthparts. They essentially pierce their mouthpart into the fruit. Then it leaves this yellowing mark. That’s not marketable for the fruit product. Even one stink bug coming into the field and feeding on the tomato, it immediately causes damage. That’s why it’s so important for growers when they do have these localized stink bug problems, because it can be so damaging.”

Hodges said there are not many insecticides effective against stink bugs. As part of her research at UF/IFAS, she wants to better understand the biology of stink bugs and why they cause damage in fields. Potential alternatives to insecticides include biological control measures and trap crops.

“Having alternative strategies that integrate trap crops, biological control and other ways to manage them before they get into the field will be useful going forward,” Hodges said. “Stink bugs are very prevalent. We do have this increased occurrence of brown marmorated stink bug in Florida, which we’re not seeing it in as high levels as other parts of the U.S. Still, the fact that it’s a new species in some areas causing problems is a bit problematic.”