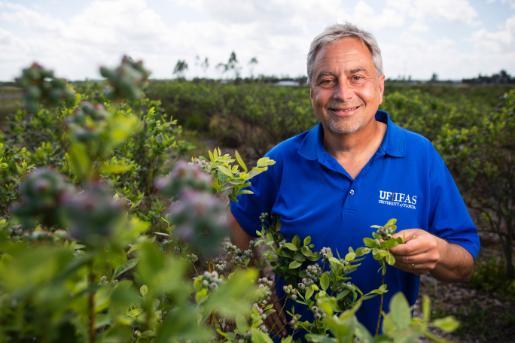 Timing can make the difference in the success of a specialty crop. In the case of Florida blueberries, it likely has helped the crop survive one of the coldest freeze events in recent memory.

Doug Phillips, University of Florida Institute of Food and Agricultural Sciences (UF/IFAS) blueberry Extension coordinator, explains how the lack of blooms in Florida’s blueberry crop helped protect it from 20-and 30-degree temperatures during the Christmas weekend.

“I don’t think there was much of an impact. A couple of days after that freeze event, I talked to several growers across the state. At least at this point it appears that there was very little damage. I think a lot of that was probably due to the fact that there wasn’t a heavy bloom yet,” Phillips said. “If there was any bloom it was fairly light. The closed buds are more tolerant or resistant to freeze damage than open blooms are. Damage can always show up a bit later with freeze damage, but at this point it looks like there was very little damage.”

Growers had not been used to those low temperatures and for that long. But the crop was not at its most vulnerable stage in late December. That may be the difference in how this year’s crop turns out.

“Two nights in a row makes it a little bit tough, especially if you run water. If you run water for two nights, you can get ice accumulation that builds up to the point where maybe it’s too heavy,” Phillips said. “I think timing wise it probably happened at a good time. If it was later in the season and we had this weather event, there would have been open blooms and there probably would have been more damage, even with overhead irrigation protection. It looks like we came through it okay.”